BEHIND THE SHOW:
Donna Rae Davidson is an award-winning playwright and actor whose work has inspired many laughs, tears, and standing ovations. Davidson has won both the Director’s and Playwright’s Festival at New City Theater. In 1998, she partnered with Rob Jones and they wrote and produced critically-acclaimed musicals and revues including Women With Balls and Claudia Kelly’s 500 Hats, both of which won Best of the Fest at the Seattle Fringe Theater Festival.

Known for her talkative nature, Donna Rae would never have gone to the Vipassana retreat if she had known what was actually involved! However, her lack of research and the fact that no one mentioned anything about 10-1/2 hours of meditation a day turned out to be a blessing. Donna Rae hopes that her audience might leave with a sliver of the same transformation (in a much shorter time period!)

BEHIND THE MUSIC:
Composer and musical director Rob Jones (aka Robinski Jones) brings his melodic talents to 10 Days to Happiness in 2014. A musical theater veteran with more than 20 years experience, Jones has musically directed and conducted many new works, most notably at Seattle Children’s Theatre, Bathhouse Theatre, Empty Space, Crepe de Paris, Village Theatre and the Oregon Cabaret Theatre in Ashland. A tireless and gifted performer, Rob credits his father (whose piano standards were anything but standard) and one whimsical church organist/teacher (who amused Rob by sneaking TV theme songs and jingles into reflective interludes during church services) for instilling him with a passion for creating lively, entertaining music.

A longtime collaborator with Donna Rae Davidson, Jones and Davidson originally met through internet dating. The artistic collaboration outlasted the relationship, and eventually, Jones and Davidson even tackled internet dating in OK.luv, a kickstarter-funded musical theater project. With Davidson penning lyrics and Jones composing the music and melodies, together they have written ten musicals and received several commissions, including My Dog Never Says Please for Seattle’s 5th Avenue Theatre. They won the Poncho Artistic Pick Award at the 2002 Seattle Fringe Theatre Festival for Claudia Kelly’s 500 Hats, about a woman addicted to hats inspired by a Pike Place Market vendor. The North Arcade, a show written and produced for the centennial celebration of Pike Place Market enjoyed a 10-week run in 2007.

Also behind the music is the Spirit of the Sound choir, directed by Reverend Eric O’Del. While typically performing uplifting and diverse music at Amazing Grace Spiritual Center and elsewhere, the choir is expanding their repertoire by singing and recording the tongue-in-cheek Buddhist-ish chants penned by Davidson and Jones for the new-and-improved production of 10 Days to Happiness. 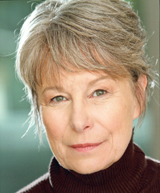 DIRECTOR:
Davidson was honored to work with Equity Actor and Director, Therese Diekhans, who directed 10 Days to Happiness in its debut run in October 2013. Donna Rae first encountered Diekhans performing in the long-running hit Angry Housewives, which inspired Donna Rae to go home and write her first musical!

With 30 years experience, Diekhans is a veteran of everything from Shakespeare to light opera to ground-breaking cult classics. Diekhans has recently starred in Doubt, Coriolanus, and The Winter’s Tale, and another one-woman show, The Most Dangerous Woman in America.

HOSTED BY:
Amazing Grace Spiritual Center is proud to host Donna Rae’s production 10 Days to Happiness, the first theatrical production in the Ballard church. As providence would have it, Amazing Grace’s Reverend Eric O’ Del and Donna Rae Davidson are former Seattle fringe theatre colleagues! In the 1980’s and 1990’s, O’Del was founder and artistic director of Alice B. Theater, as well as a playwright.

Friends for 15 years, little did Eric and Donna Rae imagine that Eric would one day become an ordained minister and co-found a church where Donna Rae would be an integral and beloved member of the congregation. Also synchronistically, O’Del has taught meditation courses at the multi-faith church.

INSPIRED BY:
10 Days to Happiness was inspired by Donna Rae’s experience at a 10-day meditation retreat known as Vipassana. A non-sectarian form of meditation based on self-observation, the technique in India and was rediscovered by Gotama Buddha more than 2500 years ago.

Today, the Vipassana meditation technique is taught primarily in 10-day residential courses such as the one that Donna Rae experienced. The retreats are supported by “pay-it-forward” donations and volunteers.

Seen through the eyes of a very funny playwright and actor, “10 Days to Happiness does for Buddhism was Late Night Catechism did for Catholicism.”